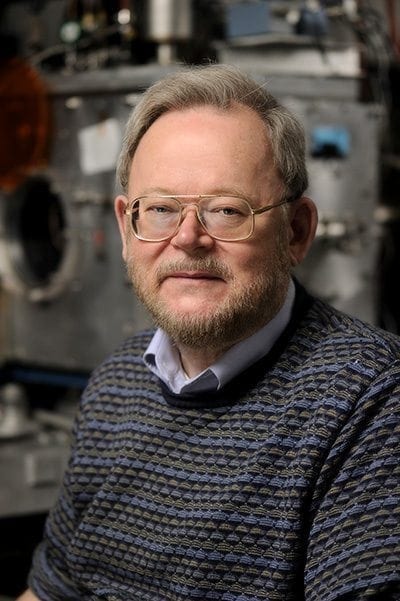 Professor Bowen's research interests are centered around clusters and nanoparticles. Clusters are aggregates of atoms and/or molecules held together by some of the same interatomic or intermolecular forces which are responsible for cohesion in solids and liquids. Clusters are thus finite-size microcosms of the condensed phase, the realm in which most chemistry occurs. A major objective of Dr. Bowen's research is to provide a molecule's eye view of many-body, condensed phase interactions. The study of size-specific and composition-specific clusters provides an incisive means of addressing this fundamental and longstanding problem in physical chemistry.

For technical reasons, clusters are best studied as negatively-charged species. Experimental methods utilized in Dr. Bowen's group to study clusters include both continuous and pulsed negative ion photoelectron spectroscopy, mass spectrometry, and cluster deposition/surface analysis. This work is instrumentally oriented, with major components of their several ion beam apparatus including both continuous and pulsed lasers, high vacuum systems, ion and electron optics, electronics and computers, as well as time-of-flight, quadrupole, magnetic sector, and Wien fliter mass spectrometers. The training in advanced instrumentation, afforded students in Dr. Bowen's group, lays a firm foundation for careers in either physical or analytical chemistry. Experimental emphasis is also placed on designing unique sources of cluster ions and on the preparation and characterization of nanoparticles for a variety of technological applications, such as catalysis.

A particularly attractive aspect of cluster studies concerns the very wide variety of scientific problems that can be addressed, stretching from the edge of biology, through chemistry and condensed matter physics, to the edge of astrophysics. Using the versatile techniques described above, Dr. Bowen's group has studied (or is studying) the number of water molecules necessary to induce the formation of zwitterions in amino acids, the energetics of electron capture in hydrated nucleic acid bases, electron-induced acid-base chemistry, the solvent-induced stabilization of otherwise unstable organic anions, the solvation of anions by aqueous and non-aqueous solvents, the energetics and growth paths of charged atmospheric aerosols, the microscopic conditions necessary for forming solvated electrons, the stability of color centers in nanocrystals of metal compounds, new aluminum hydrides with potential uses in propulsion and in hydrogen storage, the insulator-to-metal transition in clusters of divalent metals, the electronic structure of alkali metal clusters, the prospects for magic clusters as building blocks of futuristic cluster-assembled materials, the nature of exotic species such as dipole bound and double Rydberg anions, carbon dioxide activation, and catalytic water splitting, and the role of nanoclusters in interstellar dust. The opportunity to be involved in such a diversity of fields is an exciting and satisfying aspect of this work for Dr. Bowen and his research group.