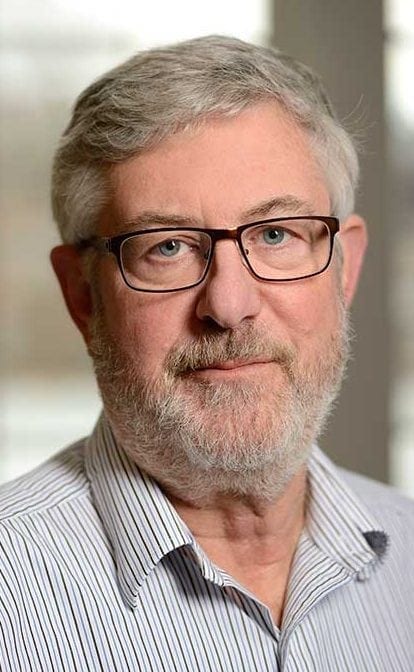 Dr. Karlin's bioinorganic research focuses on coordination chemistry relevant to biological and environmental processes, involving copper or heme (porphyrin-iron) complexes. Of interest are the reactivity with dioxygen (O2), nitrogen oxides (NOx) and organohalide (e.g., R-Cl) pollutants, and metal/ O2 chemistries with organic substrates, DNA and proteins. Essential copper or heme-containing enzymes function in O2-transport, electron transfer, O2-reduction (oxidase activity), biological substrate oxygenation (i.e., oxygenase activity), and reduction of NO2¯, NO or N2O A variety of novel metal sites are observed in proteins, including those with 1 Cu ion plus cofactor, 2 Cu's, a cluster of 3 or 4 Cu's, or porphyrinate-iron/Cu(Fe) centers.

Dr. Karlin's main research activities involves synthetic modeling, i.e. biomimetic chemistry. Research approaches utilized include (a) the rational design and syntheses of ligands allowing formation of appropriate Cu or Fe complexes, (b) synthesis and purification of such compound, (c) elucidation of structure and physical properties using IR, UV-Vis, resonance Raman and EPR spectroscopies, X-ray crystallography, stopped-flow kinetics, magnetic susceptibility and cyclic voltammetry, and (d) reactivity and mechanistic investigations such as in reversible O2-binding by copper complexes, and the oxidation of substrates. The main objective is to establish relevant coordination chemistry of copper or heme-Cu(Fe) systems, to provide a sound basis for deducing biological active site structures, the nature of reactive intermediates, and mechanism. These studies may also provide a rationale for the design of practical O2-carriers, organic oxidation and NOx reduction catalysts, or agents which can dehalogenate R-X pollutants.

Notable achievements in our labs include:

(i) the detailed chemical (e.g., spectroscopy, kinetics of formation) and structural determination of a several types of copper-dioxygen adducts, including the trans µ-1,2-peroxodicopper(II) complex shown.

(ii) the generation of model systems for cytochrome c oxidase enzyme chemistry, i.e., reactions of molecular oxygen with reduced porphryin Fe(II)-copper(I); the products are adducts formulated as iron(III)-peroxide-copper(II) species. The dynamics (kinetics-thermodynamics of O2 reaction, structures and detailed spectroscopic properties have or are being deduced. Recent efforts also include taking such heme-peroxo-copper complexes and modeling the next step of the enzyme reaction, reductive O-O cleavage.

(iii) the demonstration of multi-copper complex (i.e., those with two or three proximate copper ions) site-specific oxidative cleavage near the junction of double and single-stranded DNA (diagrams).   The specificity and type of DNA oxidation (i.e., sugar moiety versus nuclobase cleavage) varies as the nature of the copper complex.

Recent activities center on:
(i) studies of copper-dioxygen chemistry in order to elucidate characteristics of peroxo-dicopper(II) and bis-µ-oxo dicopper(III) complexes, the nature of the equilibrium interconverting them, searching for possible differential reactivity, and examining and probing for new highly reactive higher-valent copper-oxo  species.

(ii) developing new copper ion peptide chemistry, using amino acids and peptide sequences which are relevant to copper protein active sites; specific structural motifs will be examined. The research is also aimed to study peptides which bind copper and which have been implicated to be toxic (and effect biological oxidative damage) in Alzheimer’s disease states.

(iii) reactions of copper ion complexes with elemental sulfur, to generate new copper-sulfide species. A reduced tetracopper(I)-sulfide complex facilitates reduction of nitrous oxide in Nature. Newly synthesized dicopper(II)-disulfide complexes have been characterized and (e.g., see diagram) and are being used as synthons in the generation of new compounds with copper-sulfide moieties for N2O reactivity studies.

(iv) the further reactions of O²-adducts in heme-copper environments, i.e., iron(III)-peroxo-copper(II) complexes see above), with electron/proton sources. The key step in the cytochrome c oxidase reaction with molecular oxygen is the reductive O-O scission reaction; this step is fundamental to all forms of ‘oxygen-activation’ wherein molecular oxygen is made to be more reactive than it would be otherwise (i.e., towards substrate oxidation) by interaction with reduced metal ions. We have recently achieved O-O cleavage in heme copper chemistry (diagram) and are probing the mechanisms of such reactions.

(v) Nitrogen monoxide (NO; previously usually referred to as nitric oxide) is an important molecule, synthesized in Nature as a signaling agent whose action is initiated by its binding to a metalloenzyme active site. It also is processed as one of a series of nitrogen oxide electron acceptors in dentrifying bacteria. The enzyme NO reductase (NOR) takes two molecules of NO and reduces them to nitrous oxide N2O; the active site for this enzyme is evolutionarily related to cytochrome c oxidase, and possesses a non-heme iron (instead of copper) in close proximity to a porphyrin-iron moiety. As such, we are carrying out studies on NO-reactions with new heme/non-heme diiron complexes, to provide fundamental information concerning NO-binding in such an environment. A major goal is to develop systems which can couple NO molecules and study the mechanisms of such biomimetic reactions.

Peroxynitrite (ONOO¯) is a very toxic highly oxidizing and nitrating species which forms readily from the reaction of NO and O2¯ (superoxide). It is seen to have a critical and deleterious role in biological processes. We are therefore studying its possible formation via metal ion mediated chemistry, i.e., M-NO + O2 ––> peroxynitrite-M, or conversely, M-O2 + NO  ––> peroxynitrite-M, processes which may occur in biological systems. Very recently, with either copper or iron complexes, we have been able to demonstrate the viability of such reactions; metal-peroxynitrite complexes we have generated are capable of either oxidation (e.g., hydroxylation) or nitration reactions (diagram). The scope of such chemistry and mechanisms involved are being investigated.