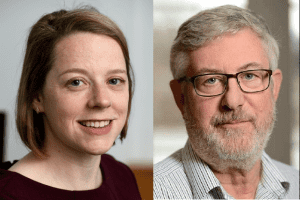 Dr. Bekka Klausen is the 2021 recipient of the ACS Award in Pure Chemistry, sponsored by the Alpha Chi Sigma Fraternity and the Alpha Chi Sigma Educational Foundation. This award recognizes a researcher within 10 years of their terminal degree who “must have accomplished research of unusual merit for an individual on the threshold of her or his career.  Special consideration is given to independence of thought and originality in the research, which must have been carried out in North America.” Klausen’s award recognizes her transformative achievements in the synthesis of silicon materials inaccessible from traditional feedstocks. Key achievements include the development of complex conjugated polymers inspired by crystalline silicon and the stereocontrolled synthesis of polycyclic functional silanes.

Dr. Ken Karlin won the 2021 ACS Award for Distinguished Service in the Advancement of Inorganic Chemistry, sponsored by Strem Chemicals. This is given “to recognize individuals who advanced inorganic chemistry by significant service in addition to performance of outstanding research”. Karlin’s service included a term as elected Chair of the ACS Division of Inorganic Chemistry (DIC), a stint as Chair of the DIC’s Bioinorganic Sub-Division, membership on review panels, for ACS’s Petroleum Research Fund and the National Institutes of Health, the scientific organization and chairing of many international conferences such as on copper bioinorganic chemistry, and the oversight of international conferences sponsored by the Society of Biological Inorganic Chemistry. Karlin’s research focuses on the fundamental coordination chemistry of copper and heme-iron, involving structures, spectroscopy and reaction mechanisms relevant to the transformations mediated by metal containing enzymes, those involving molecular oxygen and nitrogen oxides (such as NO).